“When I was first diagnosed with major depressive disorder, I was taken aback.” said writer Marie Rudowski. “It was 1993 and ‘depression’ wasn’t quite a household word yet. People with mental illnesses were considered weak or even throwaways. I was glad to have a diagnosis, but I didn’t want to think of myself as ‘broken.’" 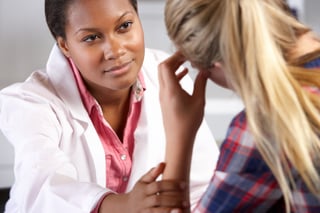 Though we’ve come a long way towards treating depression and easing the stigma associated with this disease, millions of people remain undiagnosed and a good deal of shame still persists. The recent U.S. Preventive Service Task Force (USPSTF) recommendation that all adults be screened for depression, especially pregnant and postpartum women, will help raise awareness and acceptance and ensure more people get treated.

“When I decided to seek help during my junior year of college, I had no idea what was wrong with me,” said Marie. “All I knew is that I was in anguish much of the time. I perceived everything I did as a failure. Although I tried to be upbeat and reason through my irrational reactions, I was overwhelmed by anxiety and self-abuse. People around me seemed to be able to handle life reasonably well, which made the awful hate storm inside my head seem all the more surreal. I was deeply ashamed that my thoughts were so out of control.”

“Eventually, I withdrew and started to lose my appetite. I wondered if I would have to be hospitalized, though for what exactly I didn’t know. Finally, when I got to the point where I couldn’t stop crying, I realized I needed help and made an appointment at the student health center.”

It took months of cajoling from Marie’s therapist before she agreed to see a psychiatrist for medication. “I had so many reservations,” said Marie. “I was afraid the drugs would change me or damage my body somehow. Also, I didn’t want to be labeled a ‘depressive.’ I kept telling myself that I was stronger than that. I thought of my parents, who were both what we would now call ‘mentally ill.’ I was the first person in my family to go to college and was relatively functional, so I thought I had escaped their trajectory. But there I was falling into the same behavior patterns. Eventually, my depression got so bad that I had no choice but to see a doctor.”

“I remember exactly where I was when the Paxil kicked in. I had just left my therapist’s office in Berkeley and was walking to the bus stop. The street was lined with the most beautiful pink cherry blossom trees, their petals strewn over the sidewalk, the lawns, and the gutter. It was like they had bloomed since I had gone into my appointment. Why were they so pretty? Were they magical trees? I realized then that my meds had started working. I leaned against a bench and sobbed in relief. Then I cried because I could finally appreciate the beauty of trees. Then I cried for all the years of beauty, and normalcy, that I had lost.”

“Looking back, I had been struggling for years prior to getting help. But depression wasn’t really on anyone’s radar in those days. The few times I talked about what I was experiencing, people didn’t know what to say or how to assist. I never even thought about going to a doctor.”

“I think a lot of us had vague notions of those with mental illness as untouchables wandering aimlessly around sanitariums or locked into padded cells. Even if you just had depression, that meant you needed electroshock therapy, tricyclic antidepressants, or even a lobotomy--these treatments often had terrible side effects that just might leave you wandering aimlessly around a sanitarium. I don’t know how close I was to needing any of those treatments. I do know I was lucky that I sought help just as SSRI antidepressants were coming out. Medication has its drawbacks, but it’s also helped me tremendously.”

Stories like Marie’s are common. Thankfully, these days, treatments are much more targeted and, due to education and public awareness campaigns, we are much more accepting of depression. Far more people with depression are seeking help. However, we still have some ways to go.

The USPSTF recommendation that all adults should be screened for depression is a big step toward helping even more people get relief from the disease. Funded by the U.S. Department of Health and Human Services, the USPSTF is an independent panel of doctors, charged with making preventive public health recommendations and providing a yearly report to Congress. With their endorsement, more patients will be checked for depression alongside heart disease and stroke, which will help the public see it as just another illness. More people who might not have known that they were living with depression will be educated and treated. Others, who were afraid to come forward, might accept assistance if it’s right in front of them.

“I’m glad we’re taking more proactive steps to identify people with depression and help get them treated.” said Marie. “Those of us suffering from this disease already have so much stacked against us getting help.”