A Look into Memory Disorders and New Treatment Options

Transcranial magnetic stimulation has proven itself to be an effective therapy for clinical depression and treatment-resistant depression. The mental health professionals at our Northern California TMS Health Solutions facilities get to witness the effects of TMS therapy on their patients on a day-to-day basis.

Our medical professionals measure the success of treatment by the relief it provides patients from the overwhelming and crippling symptoms of clinical depression. Seeing hopelessness transform into optimism and a renewed appetite for life is what motivates our efforts here at TMS Health Solutions.

The applications of transcranial magnetic stimulation are ever expanding. This has the mental health community asking, “What other mental health conditions can TMS therapy help treat?”

As of 2011, more than 16 million people in the United States were living with cognitive impairment. The most commonly known cognitive impairment is Alzheimer’s, and northern California is far from being insulated from this destructive disease. As California’s baby boomer population ages, the number of Californians suffering from Alzheimer’s will roughly double within the next 20 years. According to the Centers for Disease Control and Prevention, California’s Latino and Asian-American populations will be affected at a higher rate, seeing their cognitively-impaired populations triple over the same 20 years.

TMS Health Solutions has recently begun using TMS therapy to treat mild cognitive impairment or mild dementia. While not cleared for such use by the FDA, European regulatory agencies have approved TMS therapy for the treatment of Alzheimer’s disease and dementia. 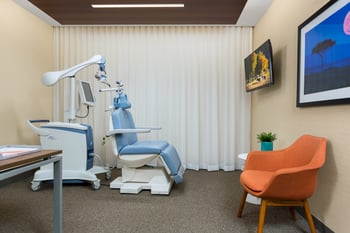 TMS Health Solutions offers its services to individuals with mild cognitive impairment, which is defined as an intermediary stage between normal aging and mild dementia. The folks treated by TMS Health Solutions are those who have experienced memory loss issues but can still conduct normal day-to-day activities. People diagnosed with mild cognitive impairment are at a significant risk of progressing to mild dementia. TMS therapy may help decrease the risk of this progression. Further, TMS therapy can help slow the progression from mild dementia to advanced dementia.

TMS cognitive impairment sessions take about 25 minutes. The treatment consists of 25 sessions over the span of seven weeks. To measure the effectiveness of the treatment on the individual, patient’s cognitive abilities are tested before and after the course of treatment.

TMS Health Solutions believes whole-heartedly that the key to the cognitive impairment epidemic will be brought about by scientific breakthroughs and innovative treatments. Contributing to this development, the mental health care company employs doctors whose goals coincide with their mission. For example, Dr. Joshua Kuluva, director of neurological services at TMS Health Solutions, shares the companies applied optimism and result driven efforts. 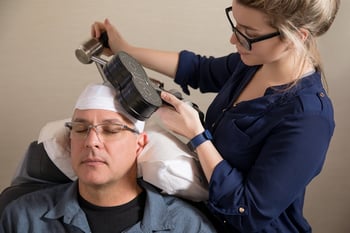 Dr. Kuluva came to TMS Health Solutions with a history of interest in treating neurological and psychiatric disorders with innovative therapies. He has taught at the NYU School of Medicine, UCSF/UC Berkeley Joint Medical Program, and the Touro University College of Osteopathic Medicine. He has also published extensively in both neurologic and psychiatric literature.

Memory disorders can be difficult to deal with when you, or someone you love, begins showing signs of cognitive impairment. TMS Health Solutions is in your corner and is eager to help, listen, and proactively approach your condition.

Dr. Kuluva recently stated, “There is increasing evidence that TMS can also be used to treat neurological disorders. Specifically, there is evidence it can slow down the progression of dementia. In our practice, we’ve witnessed great results for patients with memory disorders and have dedicated ourselves to helping slow the progression of cognitive decline.”

Being one of the first to use TMS treatment for such purposes, TMS Health Solutions is pushing the bounds of what TMS technology can do. If you live in northern California and believe you may be grappling with cognitive impairment, please contact TMS Health Solutions today.