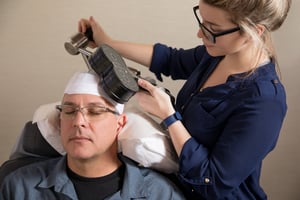 What are ECT and TMS?

ECT has been in continuous use worldwide for over 80 years. There are few treatments in all of medicine that can make such a claim. Despite its long record of safety and efficacy, ECT remains poorly understood by the general public. ECT is actually a modern, mainstream medical procedure and roughly 100,000 patients receive ECT in the United States every year. Because the treatment requires general anesthesia, it must be done in a hospital setting. As a result, it is often reserved for patients with severe, life-threatening depression. During ECT an electrical current is applied to the scalp to intentionally cause a controlled seizure. Modern ECT technique has significantly decreased or eliminated most of the troublesome side effects previously associated with this treatment. TMS does not use an electrical current itself but instead uses a powerful, MRI strength magnetic field to cause a very localized electrical current in the brain which does not spread and does not cause a seizure. As a result, TMS does not require any anesthesia or sedation. Patients can drive themselves to and from treatment with minimal disruption of daily routine.

Course of Treatment and Efficacy of the Two Treatments

A course of ECT usually consists of a dozen or more treatments which are usually given three times per week. Improvement occurs more rapidly than with TMS. Roughly 80% of patients experience significant symptom relief but, unfortunately, the benefits of ECT don’t last for many patients. Approximately half of all patients receiving ECT relapse within a year. For this reason, doctors often recommend maintenance ECT usually in combination with antidepressant drug therapy. TMS usually consists of 30 or more treatments which are usually given five days a week. Most patients begin to show improvement after two to three weeks, but it can take up to six-weeks to achieve maximum benefit. Roughly 60% of patients experience significant improvement and about 30% experience full remission, meaning that their symptoms go away completely. The benefits of TMS typically last longer compared to ECT. Less than half of all patients receiving TMS experience a relapse after six months to a year. Maintenance TMS is a lot less common than maintenance ECT although continued treatment with antidepressant medication is almost always necessary to prevent a recurrence of depression.

Side Effects of ECT and TMS

ECT can cause headaches, muscle aches, mild confusion, or short-term memory loss. When a patient experiences short-term memory loss, they have trouble remembering things that occurred recently, usually limited to events that happen on a day they receive ECT. This always goes away. Long-term memory loss is much less common. The most common side effect from TMS is a slight discomfort when the magnet is being activated. Most patients adapt to this sensation after a few treatments. There is a remote chance that TMS could cause a seizure, but there are very few documented incidents.

Which is Better? ECT or TMS?

This is a question that can only be answered by the individual patient in consultation with their doctor. Both treatments are effective in relieving depression that does not respond to antidepressant medication, but they are very different in terms of their side effect profiles and how they are administered.