Theodore Roosevelt once said, “I believe that the more you know about the past, the better you are prepared for the future.”

It is easy to get excited about the future of Transcranial Magnetic Stimulation as the applications for the technology are continually being expanded upon. The current state of the technology is finding tremendous success treating clinical depression. In fact, clinical studies have shown that half of patients treated with TMS had a 50% reduction in their symptoms, and after six weeks of treatment, one-third of patients had absolutely no symptoms of their depression or were in “remission”. But equally as fascinating is the history of TMS and how we at TMS Health Solutions ended up using electromagnetic fields to alleviate symptoms of clinical depression. 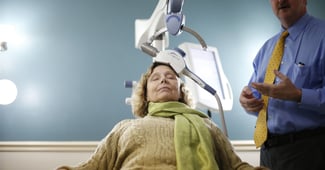 utions to our understanding of TMS came from two Italian scientists in the late-18th century. Luigi Galvani and Alessandro Volta are considered the forefathers of modern electrophysiology and bioelectric theory. Galvani was conducting experiments by connecting frog-legs to his iron fence during lightning storms. When the lightning flashed, the legs would contract. Galvani incorrectly explained the contracting to an “animal electricity” that was stored in the frogs’ legs. Volta, on the other hand, correctly hypothesized that the contractions were due to dissimilar electrical properties in the metal-tissue saline interfaces.  It was not until 1800 that Volta could prove his hypothesis.

1875: Pioneer of the neuroscience field, David Ferrier, performed many experiments regarding cerebral function. Ferrier used electrical currents to stimulate the cortex, showing that this part of the brain holds a specific map for motor functions.

1985: Fast forward 100 years later to the beginning of the modern era of TMS. It was this year that Anthony Barker and his colleagues at the created the first Transcranial Magnetic Stimulation (TMS) device. Barker also proved, to a scientific certainty, the influence of magnetic stimulation on the motor cortex of the human brain. Two years later, Barker and the Sheffield Group produced safety guidelines for the primitive TMS device.

2003: Canada approves the use of TMS treatment.

2008: The study, Efficacy and safety of transcranial magnetic stimulation in the acute treatment of major depression: a multisite randomized control trial, is published and leads to the FDA clearing the first TMS device for treating clinical depression in those patients who have not responded to medication.

2013: As TMS moves out of the laboratories and into the clinics, administrators look to form an organization that allows collaboration and the free exchange of idea regarding the science of the novel therapy. In January 2013, the Clinical TMS Society was founded. The Society includes TMS providers from across the United States and the world. The Society aims to assist its members in optimizing the administration of TMS, develop novel indications for TMS therapy, expand insurance coverage, and increase public awareness of TMS. TMS Health Solutions Chief Medical Officer, Dr. Richard Bermudes is a founding member of the Clinical TMS Society. He chaired the group first annual meeting in 2013 and was elected as its president in 2015, serving for two years.

2017: Dr. Richard Bermudes contributes and edits Transcranial Magnetic Stimulation: Clinical Applications for Psychiatric Practitioners which is published by the APA. The book offers everything mental health practitioners need to know about TMS treatment.

As TMS treatment continues to gain momentum in the field of therapeutic medicine, it is likely to pave the way for future non-invasive brain stimulation and neuromodulation techniques. The lessons of the past continue to guide the direction of TMS treatment. You can count on the mental health experts at TMS Health Solutions to be at the forefront of research and applications of TMS.