Identifying Depression in Men and Fighting the Stigma

Depression is a serious illness that can affect anyone at any age. For many men, there is the added stigma that men with depression are weak or less than other men. This leads to men trying to be “strong and sil 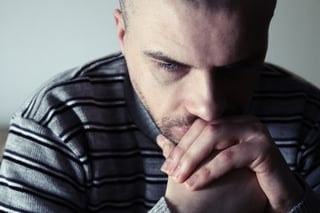 ent” about their mental health challenges and not seek the correct treatment. Approximately 6 million American men have depression each year, but fewer than half disclose their mental illness symptoms and get treatment. Most men with depression have trouble with daily life and lose interest in everything for weeks at a time. Even though both men and women get depression, men experience it differently than women. Men tend to feel more tired and irritable, and easily lose interest in their work, family, friends and hobbies.

Everyone experiences depression differently – some show only a few signs and some suffer from all the symptoms. The severity of symptoms varies among individuals and also over time. Here are some of the most common symptoms:
• Feeling sad or "empty"
• Feeling hopeless, irritable, anxious, or angry
• Loss of interest in work, family, or once-pleasurable activities, including sex
• Feeling very tired
• Not being able to concentrate or remember details
• Not being able to sleep, or sleeping too much
• Overeating, or not wanting to eat at all
• Thoughts of suicide, suicide attempts
• Aches or pains, headaches, cramps, or digestive problems
• Inability to meet the responsibilities of work, caring for family, or other important activities.

Additionally, men can exhibit other behaviors that could be signs of depression as well:
• Escapist behavior, such as spending a lot of time at work or on sports
• Alcohol or substance abuse
• Controlling, violent or abusive behavior
• Irritability or inappropriate anger
• Risky behavior, such as reckless driving

For too long men have been hiding their depression, leading to poor health, loss of jobs and relationships, and many unfortunate suicides. According to Webmd.com, men take their lives nearly four times the rate of women, accounting for 79 percent of suicides in the U.S.

According to the Movember Foundation, society as a whole does not stigmatize men with depression, it’s the men that tend to think of themselves as being burdensome or disappointing. A recent study by the Movember Foundation found that 34 percent of male respondents thought men with depression were “unpredictable”. Additionally, 56 percent of men said they would feel embarrassed to seek professional help to treat their depression, compared to 39 percent of women.

Many men don’t recognize, acknowledge or want to get help for their depression. Depression is a treatable illness that can affect anyone. It’s important that everyone be proactive about seeking the correct professional help and treatment for their mental health. With the right solutions in place, most men can feel better quickly and gain back their life.

Be sure to read next week’s blog on solutions to overcoming the stigma of depression for men.