When Alex Tillich started coming home from work with headaches, his wife Monica chalked it up to allergies, which often flared up in early spring. They got so bad that Alex would often wake up in the middle of the night. While waiting for the pain relievers to kick in, he got into the habit of responding to work emails on his phone. Then Alex began to come home later and later, and just pick at his meals. Monica began to wonder if he ever slept. Could it actually be his job that was making him ill? 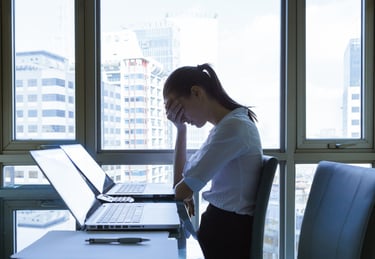 Alex wasn’t one to complain, but since state government budget cuts kicked in, leadership hadn’t figured who would take on the extra work, or who would manage his group, and the team ended up shouldering the burden. Finally, after coming home at 11pm, Alex broke down. “He told me that they had worked on an proposal for days, with their supervisor out sick.” Monica said. “Then the network went down and they lost hours’ worth of work--they had to redo everything. He really feels like he’s making a difference by helping people get their benefits, but he’s feeling unappreciated by management and just plain burned out. Really, neither of us can afford to lose our jobs, but we can’t go on like this. It’s starting to put a strain on our marriage.”

The U.S. workplace has changed tremendously in the past 20 years. Though the Internet, laptops, and smartphones have made U.S. workers extremely productive, this incredible connectivity means the expectation of 24/7 responsiveness is increasingly the norm.

Wages in many industries have stagnated since the early 1980s, however the costs of basic goods and services; including health care, housing, and education; have skyrocketed. In the state government sector, jobs have been eliminated and benefits have been reduced.

With all these changes and very real stressors, it’s no wonder we feel anxious. But just how dangerous is work-related stress to state workers like Alex and Monica? According to the CDC, it can manifest in any number of ways:
• headache
• sleep disturbances
• difficulty in concentrating
• upset stomach
• job dissatisfaction
• low morale

And note that over the long term, the effects of job pressure can lead to more serious ailments, such as:
• anxiety
• depression
• high blood pressure
• insomnia
• weakened immune system
• back and upper-extremity musculoskeletal disorders
• higher rates of obesity
• higher rates of heart disease

In fact, an August 2015 study by researchers from Harvard Business School and Stanford University found that work-related stress can be just as harmful to your health as secondhand smoke. The researchers also found that high job demands increase your odds of having an illness diagnosed by a doctor by 35%. In addition, worry that you might soon lose your job ups your the odds of having poor health by a whopping 50%.

For state workers already prone to depressive episodes, or those managing major depression, the high pressure and unrealistic expectations of the modern workplace can induce episodes or worsen existing depression. Pressure-filled jobs encourage a singular focus on productivity and achievement that precludes self-care--this can contribute to feelings of helplessness and despondency. Furthermore, there is still a good deal of stigma around mental illness, and employees with depressive symptoms may feel the need to hide their feelings and continue working though their pain in order to keep their jobs, thus prolonging relief.

If you feel job pressure is affecting your health, it’s important to seek help. There are many tactics you can take to help alleviate physical or mental stress. Remember that only a health care provider can properly diagnose whether you have depression or anxiety, high-blood pressure, and other illnesses.

Be sure to read next week’s blog on solutions to handling work-related stress.


Notes: A survey by the American Psychological Association found that men are more likely than women to say that they use child care benefits, flexible schedules, and other work-life programs. Men are also more likely to report they regularly bring work home, work during vacations and allow work to interrupt time with family and friends.