About half of Americans will suffer from depression, anxiety disorders, or another mental health illness at some point in their lives. Suicide is one the top causes of death in the U.S., with the majority of it attributed to mental illnesses. When fixes are sought, the treatment is often prescription drugs, which can cause serious side effects and become an issue of their own.

Many mental health professionals are now using a new and innovative treatment for depression. At TMS Health Solutions, and at other similar centers, doctors are treating a growing number of patients using transcranial magnetic stimulation (TMS) therapy. This is a non-invasive treatment that stimulates nerve cell activity in the brain and increases it to the point that it reduces and relieves depression symptoms. TMS therapy may be combined with traditional depression treatments for most effective results.

Dr. Richard Bermudes, a psychiatrist and chief medical officer for the California-based company, founded TMS Health Solutions in 2007. His focus is on structured, goal-oriented, and patient-centered treatment.

Dr. Karl Lanocha is a neuropsychiatrist and the director of education for TMS Health Solutions. His role is vital to the process of teaching other professionals about TMS therapy, as well as public outreach. He was among the first physicians to offer the treatment to patients.

Dr. Lanocha has been a presence in media, reaching out to local TV news stations to spread the word about the efficacy of TMS treatment, hoping to connect with those who may benefit from it. The way TMS works is pretty easy to explain. Educating the public about it can go a long way toward making it a commonly-accepted treatment. 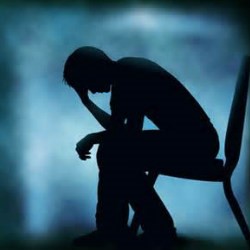 As Dr. Lanocha explains, about 16 million adults will experience at least one depressive episode every year in the United States. For the less-than-half who will seek treatment, the typical combination of talk therapy and antidepressant drugs is not guaranteed to work. Everyone's body chemistry is different, making it hard to find the optimum dose of medication, which can still produce side-effects that are, at the very least, off-putting.

What is known about people with clinical depression is that their prefrontal cortex is underactive. By stimulating it repeatedly over the course of at least four weeks, normal neuron functions in that part of the brain can be reactivated.

TMS is an FDA-approved therapy for patients who have not had success responding to traditional talk therapy and drug treatments.

Clinical depression can lead to physical illness. That would seem to be a motivating factor to seek treatment, but it is neglect of health that often leads to those illnesses in the first place.

Dr. Bermudes has written about co-occurring mental and physical illnesses. Studies have shown people with serious mental illness, including clinical depression, have a much shorter-than-average life-expectancy. That can be due to the effects of a variety of things, from medication to what is often a sedentary lifestyle.

There are many health issues which can, in some way, be connected to depression:

New research has potentially connected mental illness with stroke. Those with anxiety, depression, post-traumatic stress disorder (PTSD) and other mental disorders seem to have an increased risk of heart stroke. Depression can also cause physical changes that can cause illness or make existing conditions worse.

Insomnia and other sleep disruptions, such as not achieving deep, restful sleep, may weaken the immune system, lowering resistance to contagions and increasing risk for latent disease within the body.

Movement and thinking are combined in psychomotor skills. Things like balance and coordination can be negatively affected by depression. As people age, or depression deepens, their psychomotor skill impairment has been seen to increase.

All of these issues build on each other, making clinical depression not just widespread, but a very dangerous illness that should never be ignored.

In treating their patients, the doctors at TMS Health recognize that depression and other mental health conditions can be very confusing and isolating, to the point where people may not realize they are ill. By the time many seek help, they are often in crisis and have endured years of suffering and physical illnesses. 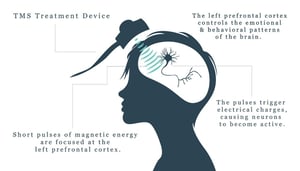 While TMS therapy itself does not require any kind of anesthesia or other medication, some patients do well with a combination of TMS and antidepressants.

As Dr. Bermudes explains on TMS Health’s website, the thousands of patients they have helped each received a customized approach. That always begins by listening carefully to an individual to understand their entire health history and symptoms.

While progress is being made on a blood test that identifies DNA markers for depression, diagnosis remains subjective, based on the interaction between the patient and the professional, whose training, experience, caring, and attentiveness can make a significant difference.

TMS therapy was developed primarily as a way to treat patients who do not respond to medication. However, it is by no means a last-ditch attempt. And it is not similar to electroconvulsive "shock" therapy used to induce seizures as a way of relief from the symptoms of a mental disorder. Electroconvulsive therapy is still an approved therapy and is most often used to treat medication-resistant severe depression and depression with psychosis, as well as bipolar disorder.

The fundamental difference of TMS therapy is that it is much less intense. It requires no sedation and no recovery time. Patients can immediately resume their normal daily activities. It works by targeting specific areas where brain cell activity has decreased or has been depressed. An electromagnetic coil is placed over the patient's forehead so that electromagnetic pulses can be sent to nerve cells in the prefrontal cortex. That part of the brain is typically associated with executive functions such as working memory and selective attention, or focus.

Stimulation prompts an electrical signal to travel through the cell neuron to its synapse and trigger the release of neurotransmitters. The more neurotransmitters that are released, the more connections are developed between the neurons. Repeated sessions are needed to allow the process to build on itself to the point that the neuron activity becomes self-sustaining.

Each procedure lasts 30 to 60 minutes. Most patients experience little or no side effects. TMS Health reports less than five percent of patients discontinue treatment due to side effects.

Both TMS therapy and antidepressant drugs are meant to have the same effect of stimulating electromagnetic signaling in the brain, but even in patients for whom medication is effective there are still side effects to be experienced from drugs circulating in the bloodstream. These may include lethargy, weight gain, and sexual dysfunction.

There are two people who are largely responsible for the success of TMS Health Solutions. Already mentioned in the article, Dr. Bermudes is board-certified in Adult Psychiatry and Family Medicine. He has cared for patients for 20 years. His expertise includes TMS therapy practice organization and policy development. He continues to be an educator by way of contributing to the medical community's knowledge of mental health conditions and therapies. His experience includes treating patients with major depressive disorder (MDD) and unipolar depression.

His recent book covers both the findings on TMS therapy and the potential for treatment of other conditions, such as obsessive-compulsive disorder (OCD), post-traumatic stress disorder (PTSD), adolescent depressive disorders, and mild dementia.

Dr. Bermudes places a high value on spending time with his wife and their four children and staying energized with trail running and mountain biking. He is a founding board member and former president of the Clinical TMS Society and a member of the California TMS Society and American Psychiatric Association. He is also certified in adult psychiatry by the American Board of Psychiatry and Neurology and in family medicine by the American Psychiatric Association.

His residency training in psychiatry was completed at the Sheppard and Enoch Pratt Hospital in Baltimore. He was awarded a fellowship in Psychoanalytic Psychotherapy at the Tavistock Clinic in London and has served in leadership positions at numerous hospitals and treatment programs, including 20 years as Medical Director for Psychiatric Services at Concord Hospital in Concord, NH.

During his career, Dr. Lanocha successfully ran his own practice, supervised residents, directed a psychotherapy clinic, and provided specialized therapies such as sleep medicine, ECT, and TMS. New Hampshire Magazine named him as one of the state’s “Top Docs” for four years.

Impressed by the efficacy of TMS therapy, Dr. Lanocha trained at the Berenson-Allen Center for Noninvasive Brain Stimulation at Harvard Beth Israel Deaconess Medical Center in 2007. He joined TMS Health Solutions in 2013.

When treating patients, he takes a holistic approach that includes TMS, mindfulness-based techniques and sleep therapies to lift the fog of depression, then continues the work to help patients redirect their mindfulness and reconnect to their resilience, joy, and sense of purpose.

During his personal time, he enjoys drawing and painting, cooking, gardening, traveling, and keeping up his proficiency in German and Polish.

Dr. Lanocha is a member of the American Psychiatric Association, the International Society for Brain Stimulation, the Center for Cognitive Liberty and Ethics, the Clinical TMS Society and the Northern California TMS Society's Clinical Standards Committee. He is also on the faculty of the TMS 360 Conferences.