Here at TMS Health Solutions we firmly believe that the cure to the major depressive disorder epidemic that plagues our society will be brought about through technology. Transcranial Magnetic Stimulation (commonly referred to as TMS) is a modern technology that relieves symptoms of depression without the harsh side effects that antidepressants sometimes cause. Administering TMS for a patient suffering from clinical depression is an honor, as we get to see firsthand the benefits of modern science through the smiles and sighs of relief from our patients. Our medical staff and leadership at TMS Health Solutions 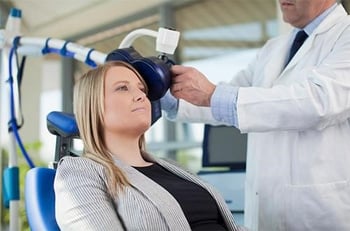 eagerly await the breakthroughs that science and technology will have on tomorrow’s mental-health community.

One such innovative treatment approach involves software and algorithms to detect signs of depression. One of the trickier aspects of clinical depression is diagnosing the disorder. Major depressive disorder, or clinical depression, comes in many forms with a wide variety of symptoms based on an individual’s genes, environment, and brain chemistry. Clinical depression is as varied as the population it affects. However, social scientists and psychiatrists are beginning to utilize “big data”, such as photos taken from a cell phone’s camera, to interpret a person’s emotional health.

Scientist recently underwent a study that collected 44,000 photos from consenting participants. Roughly half of the patients expressed being clinically depressed throughout the trial. Upon compiling the data, the scientist realized that photos taken by those suffering from clinical depression were darker, grayer, and bluer. Furthermore, the clinically depressed users posted more “face” pictures but had fewer people (besides themselves) in their photos. Based on this data, researchers built software to see if a computer could predict whether a person was suffering from clinical depression. The computer supposedly had a 70% success rate in determining which participants were clinically depressed.

While these results are certainly promising, there is no substitute for a mental-healthcare professional’s discretion when diagnosing such a complex disorder. The future of mobile mental-health support is developing at a rapid pace and users should be wary of less reputable applications. Doctors today are embracing mobile technologies by using them as supplements to in-house screening. For mental-healthcare professionals, adding mobile technologies to their toolbox allows them to access and care for more patients in remote areas, often saving their patients money.

The Highs and Lows of Mental Health Applications

By now, we have all seen the applications offering a window into your mental health. Some of these apps provide a great service to suffers of clinical depression. Quality mental-health apps offer users a 24/7 convenient method of tracking moods. This information can give doctors an unprecedented look at a patient’s condition. At the very least, having a phone on hand at all times provides us with constant access to suicide-prevention hotlines and mental-health crisis centers. Progressive healthcare providers are using cellular technology to extend in-person sessions, video conference with doctors and nurses, and provide monitoring and support for patients.

With the popularity of mental-health apps increasing, users must carefully examine the pitfalls of the new technology. For starters, mental-health applications are not well-regulated.  Such a lack of rules allows fly-by-night software to flourish, which can be dangerous when dealing with such a serious condition as depression. The lack of industry-wide standards also has created confusion regarding the efficacy of such apps. Furthermore, these apps require an awful lot of personal information to operate. Before using a mental health app, know what type of information the app makers will be taking from you and how they are using such information.

TMS Health Solutions is Northern California’s leading administer of a cutting-edge innovative technology known as Transcranial Magnetic Stimulation. For those unfamiliar with the technology, Transcranial Magnetic Stimulation, or TMS, is used to curb or relieve the symptoms of depression using the power of magnets. This use of magnets is painless and is akin to the electromagnetic pulses that one experiences during an MRI. A large population of patients suffering from clinical depression also suffer from treatment-resistant depression in that therapy and/or antidepressants have little-to-no effect on their disorder. Some individuals are simply unable to endure the side effects of certain antidepressants, which is where TMS comes in. Not only is TMS working for people who were once helpless against their depression symptoms but TMS also makes medication and psychotherapy more effective for those whose previous encounters with the therapies failed.

Transcranial Magnetic Stimulation was approved for use to treat clinical depression by the FDA in 2008. At the time, TMS Health Solutions had already been utilizing the technology for a year and is still considered to be a pioneer of the innovative therapy. It is hard to believe that all of that was a decade ago, which in technology years might as well be a lifetime. In the decade since their founding, TMS Health Solutions has sharpened their craft and expanded their services to meet the mental-health needs of Northern California.

TMS Health Solutions’ world-class treatment stems from the combination of their use of TMS and their patient-centric approach to every service that they offer. Rest assured that TMS Health Solutions methods will continue to develop as TMS technology develops and as the mental-health community finds new approaches and innovative therapy technologies to treat clinical depression. If you or someone you know is dealing with clinical depression, know that there is a team of medical professionals that can help you along your road to recovery.